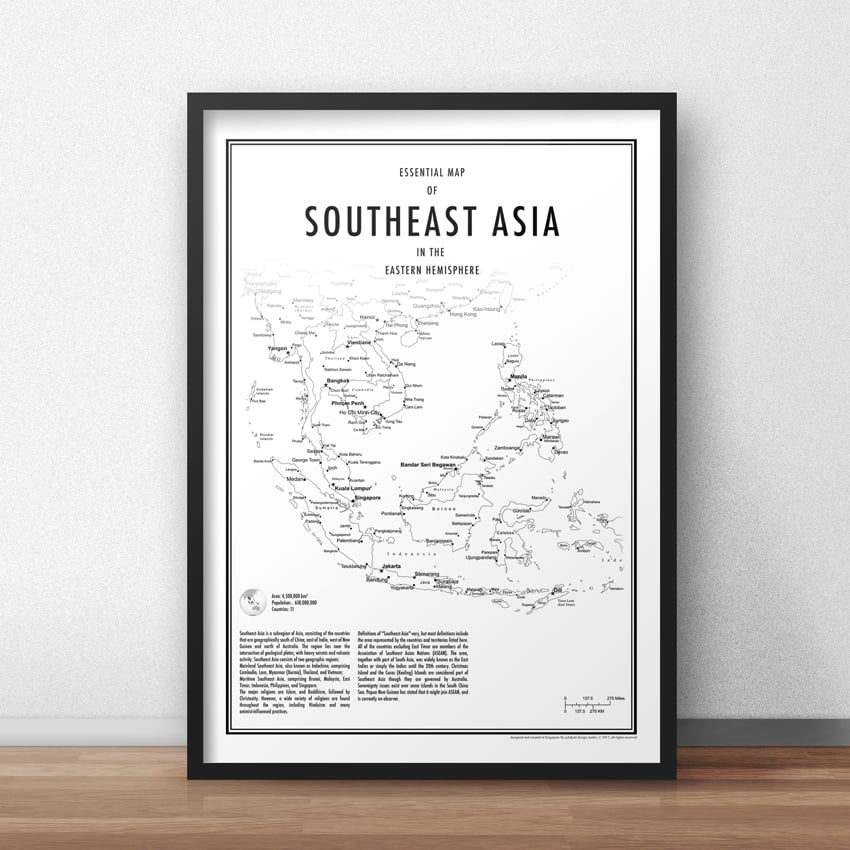 This print captures an essential map of Southeast Asia.

The dimensions of the poster are 50cm by 70cm. A frame is not included. Please note that there may be some small variance as the prints are hand-cut.

This poster ships from one of our fulfilment centers in Europe, the US and Australia in a padded cardboard tube.

In most cases it takes between 2 and 3 weeks for your print to arrive, however, please kindly understand that shipping durations may vary depending on your location and other circumstances. Express shipping is not available.

Also, please note that international shipping to your country may carry import taxes that have to be paid by the buyer.

The text at the bottom reads: "Southeast Asia or Southeastern Asia is a subregion of Asia, consisting of the countries that are geographically south of China, east of India, west of New Guinea and north of Australia. The region lies near the intersection of geological plates, with heavy seismic and volcanic activity. Southeast Asia consists of two geographic regions: Mainland Southeast Asia, also known as Indochina, comprising Cambodia, Laos, Myanmar (Burma), Thailand, and Vietnam; Maritime Southeast Asia, comprising Brunei, Malaysia, East Timor, Indonesia, Philippines, and Singapore. The major religions are Islam, and Buddhism, followed by Christianity. However, a wide variety of religions are found throughout the region, including Hinduism and many animist-influenced practices.
Definitions of "Southeast Asia" vary, but most definitions include the area represented by the countries and territories listed below. All of the countries excluding East Timor are members of the Association of Southeast Asian Nations (ASEAN). The area, together with part of South Asia, was widely known as the East Indies or simply the Indies until the 20th century. Christmas Island and the Cocos (Keeling) Islands are considered part of Southeast Asia though they are governed by Australia. Sovereignty issues exist over some islands in the South China Sea. Papua New Guinea has stated that it might join ASEAN, and is currently an observer."

(source of text is Wikipedia)

0
Your bag is empty
Start shopping